Creative agencies around the world are constantly dealing with gridlock in approvals and workflows. Men in Green, a Dutch creative agency, recently identified an access issue that was creating a bottleneck in their design process and was slowing down production.

To maintain high production standards, Men in Green had strict quality controls in place that only allowed for senior designers to produce data-driven creatives within Display & Video 360. With the increased client interest in these types of creatives and multiple testing variants, more assets than ever before were passing through the design team.This permissions protocol slowed down production time, was inefficient and was an unsustainable option for Men in Green. It was costing the agency time and money.

To fix this, Men in Green needed to find a way to allow designers across all levels to create and collaborate on their Display & Video 360 creative projects, while also guaranteeing the quality that they had been known for over ten years to produce.

Men in Green used Ads Creative Studio to streamline the process for creating data-driven creative assets that could be exported to Display & Video 360. This created a space where Men in Green's junior designers could test and perfect designs in an environment dedicated to asset creation.

“Ads Creative Studio is the perfect solution for our challenge. It gives a risk-free environment to build creatives and allows for easy collaboration between multiple designers”

By using this new centralized creative platform, the agency shifted responsibilities and allowed more team members to work on building and editing assets. That cleared up time for senior staff to focus on other parts of the business such as quality assurance and publishing in Display & Video 360.

Given that working with creative assets is no longer limited to senior designers, Men in Green can now produce high quality creatives in half the time as before. They have been able to increase the number of creatives and personalized ad variants produced for their clients and have gained an edge over their competitors. 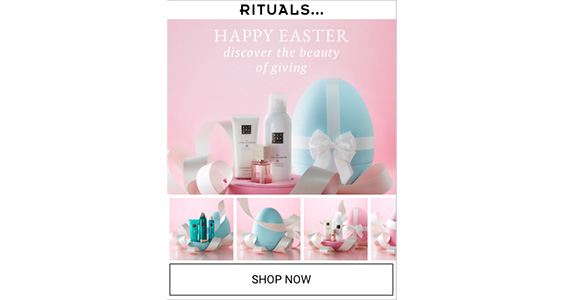 The use of Ads Creative Studio has also greatly benefited Men in Green’s clients. Because production time is quicker, their clients are able to run larger data-driven campaigns in record time. For example, Men in Green was able to quickly design multiple ad variants for a recent Easter campaign for the cosmetic brand, Rituals. They showcased the brand’s wide range of products alongside personalized messages based on local markets and drove a 278% higher click-through-rate, and 103% higher conversion rate compared to standard banners.

Due to its significant impact to the agency's collaboration models and the way that it completely revamped their operational efficiencies, Ads Creative Studio will continue to be an integral part of Men in Green’s creative process.